By the mid- seventeenth century the lands of Cartsburn and Cartsdyke belonged to John Crawford of Kilbirnie who in 1641, because of his distinguished services to the Crown during the early years of the Wars of the Three Kingdoms (1638 to 1651), was made a baronet by King Charles I.
He died in 1662 and left two daughters by his second wife Magdalen, daughter of Lord Carnegie, named Anne and Margaret.
Anne married Sir Archibald Stewart of Blackhall the first baronet, while Margaret became the wife of Patrick Lindsay, second son of the Earl of Crawford.
The lands were entailed on Margaret and her male heirs, who had to assume the name of Crawfurd with the family arms. 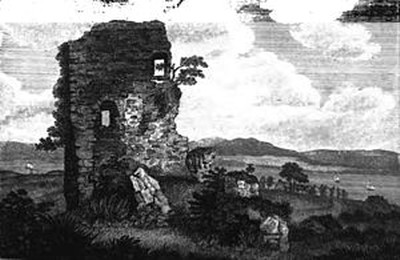 The Register of the Great Seal of Scotland, contains a charter of confirmation, dated 29 June 1663, in favour of Margaret Crawford of the lands and barony of Kilbirnie [granted by her father Sir John Crawford of Kilbirnie in 1662] including the 40 shilling land of the old extent of Cartsburn with buildings and fishings and free entry to and exit from the moor and marsh of Greenock, with the mill lands of Greenock in the barony of the same.
Under this document Margaret and her heirs could sell and dispose of the lands of Easter Greenock and Cartsburn.
In 1669, Margaret Crawford, by now Lady Kilbirnie, with the consent of her husband sold the lands of Cartsdyke to Sir John Schaw of Wester Greenock to whom was granted in 1670 a Crown Charter containing a clause by which Easter and Wester Greenock were to be united into a single barony, later called the Burgh of the Barony of Greenock.
However, the disposition reserved the right to Cartsburn, which Lady Kilburnie afterwards conveyed to her cousin Thomas Crauford of Cartsburn, second son of Cornelius Crawford of Jordanhill], later the first baron.
The writs of the Forty-shilling lands of Cartsburn dating between 1628 and 1656, which were sold by Margaret Crawford, Lady Kilbirney, and her husband Mr Patrick Lindsay to Thomas Crawford of Cartsburn in 1678, are still extant and can be consulted in the National Archives of Scotland in Edinburgh.
The place name Cartsdyke may be derived from Crawford’s Dyke, which was named after John Crawford of Easter Greenock who built a quay wall or dyke at Greenock in the middle of the sixteenth century. 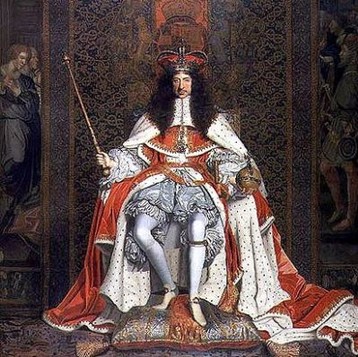 Cartsburn was erected into a barony, and a burgh of barony with the privilege of a weekly market and several fairs, in favour of Thomas Crawford of Cartsburn by a charter of Charles II dated 16 July 1669 (NAS Ref. C2/62/1/57).

People associated with the Barony include the inventor James Watt, the nation’s bard Robert Burns, and the poet Jean Adam.
The famous inventor, James Watt grew up within the Barony. His father and namesake, James Watt, was contracted to enlarge the mansion house of Sir John Shaw, 2nd Baronet at Greenock, and his grandfather, Thomas Watt, was Bailie of the Barony of Cartsburn. 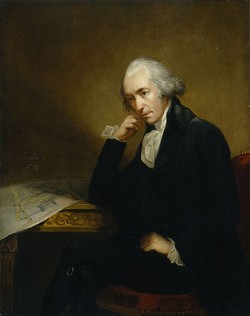 Robert Burns was invited to stay at the estate at the invitation of the 4th Baron, Thomas Crawfurd of Cartsburn.  He later mentioned the Baron in his work.
Jean Adam’s published poems of 1734 were dedicated to the Baron of Cartsburn. 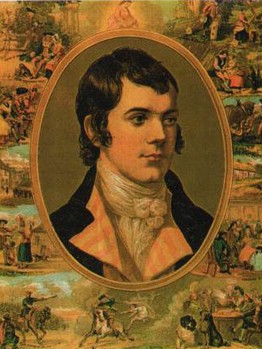 To the south of Crawfordsdyke lay the House of Cartsburn the principal messuage of that barony and seat of the Crawfords of Cartsburn.
The earliest account of Cartsburn is in Hamilton of Wishaw’s ‘Accompt of the Sheriffdom of Renfrew’ published in 1710.
He wrote “The town is mostly sub-feud to merchants, seamen, or loading-men, who have built very good houses in it, and it is a very thriving place.”
The residence of the Crawfords of Carseburn was Cartsburn Mansion House which survived until around 1900 when it was demolished and replaced by Cartsburn School. 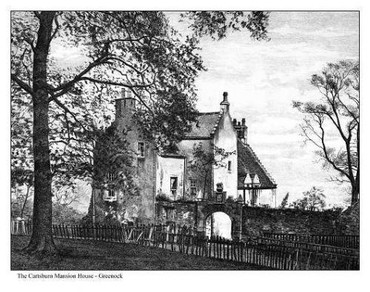 Crawford of Carseburn feud certain of his lands to the merchants, shipmasters and manufactures, that were increasing settling in and around Greenock as the town expanded as from the late seventeenth century.  Among them was John Spreull, known as Bass John, an apothecary and merchant from Glasgow.
Spreull was imprisoned on the Bass Rock for six years around 1680 on the basis of his Covenanting sympathies. Later he was an apothecary and merchant in Glasgow who feued land in the High Street of Crawforddyke from Crawford of Cartsburn.

The Royal Fishing Company 1670 to 1684 based in Greenock brought prosperity and established Greenock as a port, especially in the transatlantic trade.
Greenock was ideally sited to serve industry and commerce in west central Scotland. Greenock benefited from a deep water port while that of Glasgow suffered from requiring constant dredging. The rise of transatlantic trade from the seventeenth century onwards generated a demand for ships.
Since 1711 the Scott family were building ships at Greenock and the industry was in part based at Cartsburn and Cartsdyke.
By 1904 Scotts’ Shipbuilding and Engineering Company Limited was one of the main shipbuilding companies on the Clyde.
In 1836 Crawford of Cartsburn consented to Cartsdyke and Cartsburn being within the jurisdiction of the burgh of Greenock, and at the same time transferred his rights under the Crown Charter to erect and maintain a harbour at Cartsdyke.
Greenock was keen to gain control over the land as it enabled the burgh to develop its harbour facilities the prosperity of which was being threatened through massive developments in the harbour facilities in nearby Glasgow

Thomas Crawford of Cartsburn died on 15 October 1695, his first wife was Jane, daughter of John Maxwell of Auldhouse, they had two daughters Marion and Mary.
Marion married William Walkingshaw of Scotstoun, while Mary, married Alexander Yuill of Darleith.

Thomas married twice, his widow was Jean, daughter of Andrew Semple, and they had three sons, one of the sons was George Crawfurd, the compiler of The Peerage of Scotland. 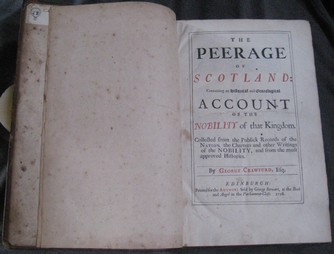 The eldest son Thomas succeeded. He married firstly Rebeccca, daughter of John Barnes a Glasgow merchant; and had two daughters, Marion married Patrick Hunter of Hunterston, and Margaret, married Thomas Fleming a merchant in Rotterdam; secondly, Bethia, daughter of Archibald Roberton of Bedlay.
The second son was Hugh Crawford of Woodside, and the third son was George Crawford, the Histiographer of Scotland

Thomas Crawford of Cartsburn, died in 1743, for whom there is a testament dated 29 November 1743, was succeeded by his second son Archibald, who married Margaret, daughter of John Cunningham of Cadell in 1739, and were parents of Bethia.  His first son Thomas, an advocate, died in 1732 and left a widow Cecilia Forbes but no children.

The last Crown Charter for this barony was granted 12th May 1858 to their son Thomas McKnight Crawford.

In 2008 the barony was trasferred by Alan Howard Crawfurd Colls (as senior heir and joint holder with his brother Richard Andrew Colls, for both of whom the Barony was held in trust 1958–1974) to Mr. Mark Paul Lindley-Highfield of Ballumbie Castle, who had the dignity for short time until 1° December 2010 when it was trasferred to Dr. Pier Felice degli Uberti.