Thomas Crawfurd of Cartsburn, 4th Baron of Cartsburn (1783–1791), invited Robert Burns to stay at his country estate at Cartsburn.[1][2] Burns himself writes of Thomas Crawfurd of Cartsburn’s “ingenious, friendly, and elegant epistle”.[3] In his Preface to the Memoirs of Sir Ewen Cameron of Lochiel, Chief of the Clan Cameron, James Macknight describes Thomas as “a person of superior literary attainments”, who “collected a considerable library”.[4]

Alan Howard Crawfurd Colls, 13th Baron of Cartsburn (1958–2008) (as senior heir and joint holder with his brother Richard Andrew Colls, for both of whom the Barony was held in trust 1958–1974) 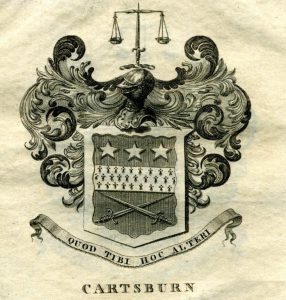 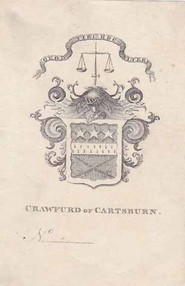 Coat of arms of Crawfurd of Cartsburn 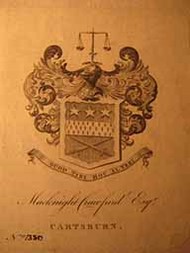 Coat of arms of  Macknight Crawfurd of Cartsburn 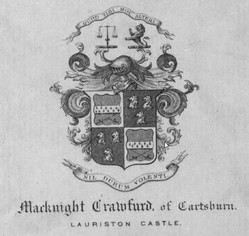 Coat of arms of  Thomas Macknight Crawfurd of Cartsburn (1866) 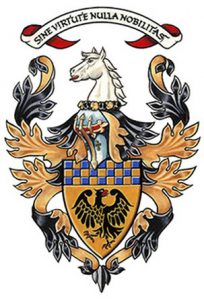 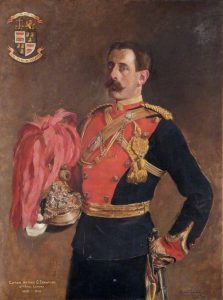 [1] “Thomas Crawford of Cartsburn”. Robert Burns Country: The Burns Encyclopedia. Retrieved 2009-08-29.
[2]  Burns, R. (1811). Walker, J.. ed. Poems by Robert Burns: with an account of his life. 2. Edinburgh.
[3]  Motherwell, W. & Hogg, J. (1835). The works of Robert Burns. iv. Glasgow: Archibald Fullerton & Co..
[4]  Macknight, J. and Drummond, J. (1842). Macknight, J.. ed. Memoirs of Sir Ewen Cameron of Locheill, chief of the Clan Cameron: with an introductory account of the history and antiquities of that family and of the neighbouring clans. Edinburgh: Maitland Club.
[5] Motherwell, W. & Hogg, J. (1835). The works of Robert Burns. iv. Glasgow: Archibald Fullerton & Co..
[6] Weir, D. (1829). History of the town of Greenock. London: Whittaker & Co.
[7] The following Note was attached to a Warrant issued by the Lord Lyon King of Arms of date 1 December 2009 granting Armorial Bearings to Mark Paul Lindley-Highfield of Ballumbie Castle, Baron of Cartsburn:-NOTE: In his Note dated 15th May 2006 refusing the Petition of Margaret Hamilton of Rockhall, Baroness of Lag, as regards the appropriate form of baronial additaments, Lord Lyon Blair also considered what evidential value might attach to an entry in the private and unofficial “Scottish Barony Register” which had been established as a means of recording the transfer of quondam feudal baronies following the coming into force on 28th November 2004 (“the appointed day”) of the Abolition of Feudal Tenure etc (Scotland) Act 2000.  Section 63 of that Act dissociates such baronies from both jurisdiction and land.  The Act, however, preserves the dignity of baron, but enacts that after the appointed day any such dignity shall be transferable only as incorporeal heritable property.  Lyon Blair indicated that he was not disposed to accept an entry in this private register as proof that a Petitioner was entitled to the dignity of baron.  He noted the difficulty in regard to verifying both the existence and the ownership of a barony since the appointed day given the lack of an official public register.  The Scottish Barony Register was a private register with no statutory basis which offered no guarantee of the validity of any claim and was not covered by any government indemnity providing protection from error or fraud.  It had been established as a company limited by guarantee, one of the directors being Mr Brian Hamilton who was well-known as being active in the purchase and sale of baronies.  Lyon Blair was also critical of some of the terms and conditions attached to registration.  He concluded, “I do not consider that a private Register, managed by a person appointed by a private company with no public scrutiny, and operated under terms which allow complete discretion as to what evidence is to be provided, is an acceptable source of evidence in an application before the Court of the Lord Lyon.”
Lyon Blair’s ruling in that Petition was subsequently subject to judicial review.  When the review reached court, the parties were able to agree a statement as regards the appropriate form of baronial additaments, to which the Court interponed authority.  That agreement, however, did not include consideration of the evidential value of the Scottish Baronial Register.  Accordingly Lyon Blair’s comments on this still stand.  I am persuaded that there is considerable force in Lyon Blair’s reasoning and am not prepared to accept an entry in the Scottish Baronial Register as being, in itself, sufficient proof of ownership of the barony in question.  I appreciate, however, the unsatisfactory nature of the present position in relation to baronies and the need to explore further options.  In the meantime I am persuaded that I can regard the present Custodian of the private register, Mr. Alistair Rennie, as a man of skill, and am prepared to take his approval as Custodian of the registration of the ownership of a particular barony, as evidenced by the company registration stamp, coupled with a confirmatory statement to Lyon Office from Mr. Rennie himself, as being, in principle and for aught yet seen, sufficient proof of the existence and ownership of the barony in question.  It is on this basis that I have determined that the Petitioner is entitled to the dignity of baron of Cartsburn for aught yet seen.
(signed) David Sellar  Lyon.

We use cookies on our website to give you the most relevant experience by remembering your preferences and repeat visits. By clicking “Accept All”, you consent to the use of ALL the cookies. However, you may visit "Cookie Settings" to provide a controlled consent.
Cookie SettingsAccept All
Manage consent

This website uses cookies to improve your experience while you navigate through the website. Out of these, the cookies that are categorized as necessary are stored on your browser as they are essential for the working of basic functionalities of the website. We also use third-party cookies that help us analyze and understand how you use this website. These cookies will be stored in your browser only with your consent. You also have the option to opt-out of these cookies. But opting out of some of these cookies may affect your browsing experience.

CLIK HERE FOR PRIVACY POLICY
Necessary Sempre abilitato
Necessary cookies are absolutely essential for the website to function properly. These cookies ensure basic functionalities and security features of the website, anonymously.
Functional
Functional cookies help to perform certain functionalities like sharing the content of the website on social media platforms, collect feedbacks, and other third-party features.
Performance
Performance cookies are used to understand and analyze the key performance indexes of the website which helps in delivering a better user experience for the visitors.
Analytics
Analytical cookies are used to understand how visitors interact with the website. These cookies help provide information on metrics the number of visitors, bounce rate, traffic source, etc.
Advertisement
Advertisement cookies are used to provide visitors with relevant ads and marketing campaigns. These cookies track visitors across websites and collect information to provide customized ads.
Others
Other uncategorized cookies are those that are being analyzed and have not been classified into a category as yet.
ACCETTA E SALVA